Knotted carpets first appeared in the early Asian steppes. It is accepted that nomads belonging to the steppe culture are a kind of art arising from the living conditions and Turkish tribes, which are the most typical communities of the steppe generation, play a major role in carpet production.

This carpet was a masterpiece that could not be reached in later periods with 36000 Gördes knots per 10 square centimeters.
Carpets from Samarra
The knot technique was brought to the West from Central Asia and was recognized in the Islamic world when the Abbasid dynasty, which ruled the Islamic State, established the city of Samarra for Turkish guards. Some examples that were considered to have remained during the Abbasid period and were woven in Samarra or thought to have been touched by the Turks in Asia and brought to Samerra were found in excavations. These examples are exhibited at the Cairo Museum, Gotheburg Röhss Museum in Sweden and the Stockholm National Museum.
Great Seljuks
Hariri's depiction of a carpet in Makamat miniature
11.-12. With the Seljuk Turks that had spread from Iran to Mesopotamia and Syria in centuries, Turkish carpets spread to the west.

Although there are frequent mention of carpet centers and highly praised Seljuk carpets in ancient sources, there are no samples of Turkish carpets that have been found to have survived since the Great Seljuk period. This is explained by the disappearance of carpets, rugs and textile products of the Great Seljuks during the Mongol invasion. But 13-15. century miniatures of carpet depictions, 12-14. century is considered to be the original carpet samples and is considered as the most important source to recognize Seljuk carpets today. These descriptions depict that the period of carpet weaving was a very important branch of art in the Seljuks; reveals that there is an established and developed knotted carpet tradition and that the Seljuk carpet art is a solid foundation for the subsequent carpet art with continuous developments.

Italy, the ruler of maritime trade, was the first spreading area and transit center of carpets. During this period, Anatolian carpets began to appear in the paintings of European painters as well as in eastern miniatures. [6] In the 14th and 15th centuries, European painters often depicted carpets with animal figures.

In a painting dated 1604, the artist of the Holbein carpet is unknown.
During the 14th and 15th centuries during the Ottoman period, the principles of Seljuk carpet art were observed in terms of technique and motif. Samples of early Ottoman carpets are often depicted in the paintings of European painters. Beginning in 1451, Turkish carpets were first seen in the paintings of Italian painters. until the end of the Dutch and German painters were painted in the paintings. This period, the carpets of the literature based on the name of the German painter Hans Holbein'in "Holbein carpets," as passed. Animal figured carpets 15th century. Towards the end, it was seen that European painters disappeared from their paintings and replaced with geometric designs. In order to meet the needs of palaces and mosques, large amounts of carpets were woven and traces of Ottoman architectural art were seen in carpets. [5] During this period, two types of carpets were woven: Saray carpets and Uşak carpets. [2]
Palace carpets, carpets woven by artists in the Ottoman palace. These carpets, unlike Anatolian carpets, are woven with the Iranian knot called "cine". While palace carpets were dominated by Iranian influences in their colors and patterns, they gradually gained a characteristic of Anatolia. Tulip, hyacinth, carnation and pomegranate flowers, such as the main theme of Ottoman art in this era of naturalist designs, carpets also showed itself.
The second type of carpet woven in the classical Ottoman era is Uşak carpets. In order to be laid in the Ottoman palace and given as a gift to foreign countries, we started to weave carpets to Manisa and Uşak near this city and the carpet models drawn by the palace craftsmen were sent to Uşak and made here on behalf of the palace. Uşak carpets were shipped to Europe through the port of İzmir and became known as "İzmir carpet" in Europe.
Usak carpets Medallion (tableware) Usak Carpets and Starry Uşak Carpets "are divided into two groups. In the 17th century, a new group of carpets called şak Uşak Carpets with white floors or post floors çıktı emerged and touched around Uşak in the 17th century. During the Ottoman period, the carpets exported to Hungary and now to Romania were known as Transylvanian (or Erdel) carpets, which are now found in museums in Hungary.
When Uşak carpets started to lose their fame in the 17th century, Gördes, Kula, Bergama and Milas were used in Western Anatolia. Konya-Ladik, Kırşehir and Mucur carpets became famous in Central Anatolia.

Enjoy Free Delivery all over the UAE

For all our valued customers, we have 2 day money back guarantee

Let customers speak for us

I loved the customer service to start with, Salih was regularly in touch to provide the best services he could. The carpet was customised and it turned out exactly I wanted. Loved it!!! 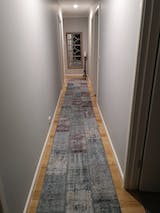 A
ABRASH CARPET STORE A.
Unique carpets and Great quality!

The carpet i bought is a vintage roug. Its a wonderful roug and I’m going to buy another one. The customer service is also excellent!!

i received my order within the promised time! Loved the quality and colour. I will recommend to everyone for sure

By far my favorite store for carpets ! Bought 2 so far and hoping to get my third in the future
The colors and quality are superb and the customer experience is great
Thank you ! I am a very satisfied customer

A
ABRASH CARPET STORE A.
Best carpets in UAE

I ordered 6 carpets and received all in time. I have recommended to all my friends...